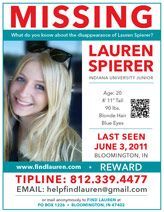 When choosing which college to attend, young adults have so many options. For some, they simply want out of their hometowns. Others want to go to the best schools for their majors. Or if they are like me, they want to go the school that will give them the biggest break on tuition.

Lauren Spierer was a beautiful, vivacious 20 year old who was a sophomore at Indiana University in 2011. I have no idea what made her choose Indiana University when she was an upstate New York native. Lauren was studying textile merchandising, a degree she was hoping to to use in the fast paced world of fashion. Jesse Wolff, Lauren's high school sweet-heart, was also attending I.U. Bloomington.

As a resident of Indiana, I am very familiar with Indiana University in Bloomington. A big school with big pride. The school was founded in 1820 according to an article published by U.S. News and World Report. Due to the size of the school, it is no surprise that Bloomington is known as a party town.

At 4 foot 11 inches, Lauren was a slender coed and attractive with bright blue eyes and blonde hair. Lauren's parents were proud of her decision to continue her education and supported her in her move to Bloomington. Rob and Charlene have stated in numerous interviews that when they dropped their daughter off on freshman move in day that it seemed like exactly what college should be.
They had no idea that just a year later, their lives would forever change. On June 3, 2011, Lauren Spierer disappeared and has not been seen or heard from since.

THE NIGHT OF LAUREN'S DISAPPEARANCE 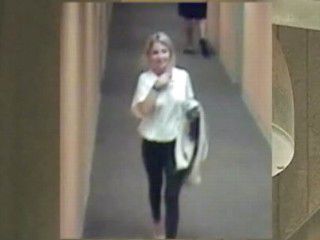 Lauren left her apartment at the Smallwood Apartment building at about 12:30 am. On the evening in question, she was wearing a white blouse and black leggings. She met up with friends to "pregame" before hitting a local bar. Lauren was caught on surveillance cameras leaving her apartment with her friend David Rohn.

After leaving her apartment Lauren and David met up with friends at Jay Rosenbaum's townhouse. Jay lived at the 5 North Townhomes not far from Lauren's apartment. At Jay's, Lauren met up with Corey Rossman and Mike Beth. Mike and Corey were room mates and lived only a couple doors down from Jay.

From my research, I understand that this is the first time Lauren has met Corey and Mike. In a relatively short amount of time, Lauren becomes comfortable with Corey. She and Corey leave Jay Rosenbaum's apartment at 1:30 am in order to walk to Kilroy's sports bar.

Kilroy's is now called Kilroy's Recess. The bar is the only 18 and over night club in Bloomington. The bar is only allowed to serve alcohol to patrons 21 and over. It is important to note that Lauren was only 20 at the time of her disappearance. It was likely that she had a fake I.D. and that the bar got sloppier with checking I.D.s with the later it was.

Corey and Lauren stayed at Kilroy's for approximately 45 minutes after arriving at 1:46 am. Just long enough for Lauren to take off her shoes and lose her phone. Upon leaving the bar, Corey and Lauren walk back to her apartment at Smallwood.

They enter the apartment building at 2:30 and exit the building at 2:42 am. During their time in the building, an altercation is caught on security footage on the fifth floor. The same floor that Lauren lived on. The footage shows Corey and Zach Oaks getting into a dispute. Zach ends up punching Corey. Corey later states that this punch causes him to be unable to remember anything from that night after being at Kilroy's sports bar.

Zach claims that altercation occurred when he voiced his concern over the way Corey was treating Lauren. It is important to note that Zach is one of Jesse Wolff's, Lauren's boyfriend, friends. Jesse did not go out with Lauren that night because he stayed home to watch game two of the NBA play offs.
For some reason, unknown to us Corey and Lauren decide to go back to his place instead of staying at her apartment. Between 2:48 and 2:51am security cameras catch footage of Corey and Lauren walking down an alley to his place. During this walk, it is said that Lauren fell multiple times and eventually Corey picked her up in a fireman's carry.

Upon arriving at his townhouse that he shared with Mike Beth, Corey puked while trying to go up the stairs to his room. According to Beth, Lauren was conscious, but visibly intoxicated. He put Corey to bed and returned to Lauren.

Deciding that he didn't know Lauren well enough to continue to babysit her when she wanted to leave, Mike Beth decided to take her back to Jay Rosenbaum's townhouse since Jay was their mutual friend and had known Lauren from high school.

At 4:30 Jay Rosenbaum states that he watched Lauren walk down the block still barefoot without her phone, her keys, or her I.D.. This was the last time she was ever seen. 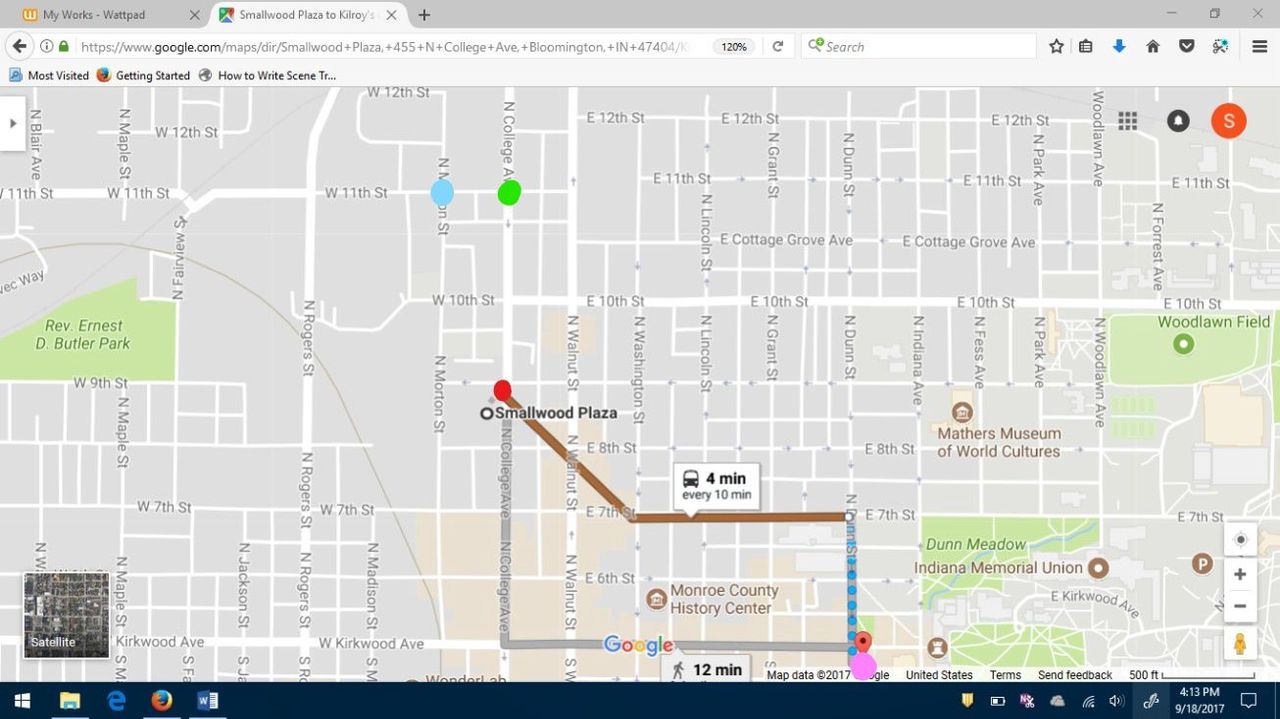 (On the map provided above, the Blue Dot is 5 North Townhomes. The red dot is Smallwood Plaza. The purple dot is Kilroy's. The green dot is where Lauren was last seen.)

THE INVESTIGATION
Lauren was reported missing upon her boyfriend realizing that her phone had been left at the bar on June 3, 2011. On June 4, Lauren's parents Rob and Charlene arrive in Bloomington in hopes of finding Lauren.

Lauren had a heart condition called long QT Syndrome, without medication it could be fatal. So during the first days of the search for Lauren, her parents were desperate to find her so that she would have her medication that had been left at her apartment.

In the week immediately following Spierer's disappearance rewards are offered for her return. Jim Irsay, the owner of the colts, offered $10,000 for her safe return. Her parent's put up a reward of $100,000 for information leading to the return of their daughter. Since the beginning of the investigation, Bloomington Police have received over 3,500 tips regarding Lauren's disappearance.

Soon after Lauren's disappearance, all of the men that had close interactions with Lauren obtained attorneys. Lauren's boyfriend, Jesse Wolff, helped search for Lauren for two days, then obtained legal counsel. It is important to keep in mind that getting an attorney is not supposed to be seen as a sign of guilt in the United State's justice system.

Many individuals that were with Lauren the night of her disappearance were uncooperative with the Bloomington Police. None of the men have submitted to polygraph tests by the department and refuse to give statements. All statements have been given via attorneys.

As the investigation into Lauren's disappearance went deeper. Police and Lauren's parents learned about her wild side. When searching Lauren's apartment police found cocaine. Lauren had also been picked up on a public intoxication charge in the past. During this time, Jesse Wolff's mother also claimed that Lauren had been thrown out of summer camp for drug possession. I was unable to find any proof of this allegation. 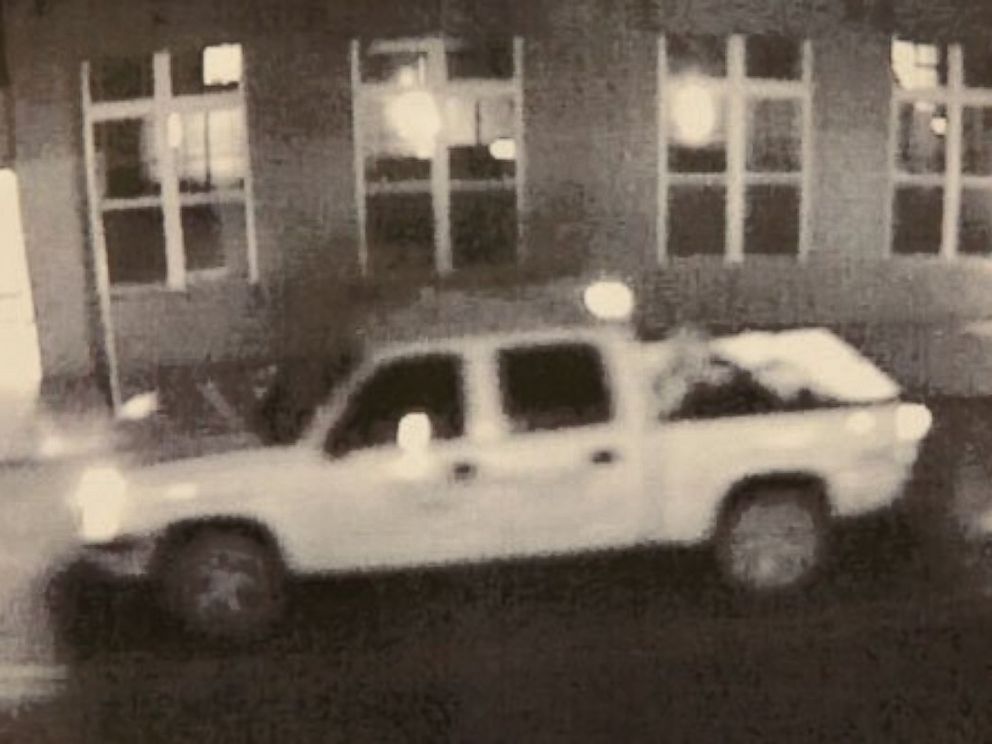 Bloomington have only released one other clip from the security camera footage from the night Lauren disappeared. Police released this photo of a truck that was seen driving around the block where Lauren was last seen by security cameras. This truck produced numerous leads, but was later written off by police. The owner of the truck came forward and was able to sufficiently explain why he was in the area.

FORMAL STATEMENTS FROM PERSONS OF INTEREST
Jay Rosenbaum is the self proclaimed last person to see Lauren Spierer. His defense attorney is James Voyles. He has taken a privately administered polygraph that he passed, which has been provided to the Bloomington Police Department. He refuses to speak directly to Lauren's Parents.

Jesse Wolff, Lauren's long term boyfriend, is also considered a person of interest. I was unable to locate an official statement from him. His parents have given numerous statements. They claim that their son has completed a polygraph, but would not comply with Bloomington Police to take one.
They claim that Bloomington department was not competent. His parents claim that Lauren's parents continue to spread lies about their son and the only reason she is dead is her own drug abuse.

Corey Rossman, the man that Lauren spent the most time with that evening, obtained an attorney shortly after her disappearance. The attorney, Carl Salzmann, issued a statement saying that Corey had no memory of the evening after leaving Kilroy's. In an interview two years after Lauren's disappearance, he claimed that Lauren's parents were harassing him and the other victims of the evening. He claims that he and Lauren's other friends were victims due to the trial in the media that they have faced. He states that he has cooperated to his best ability.

Mike Beth has only been discussed minimally in news following the immediate time surrounding Lauren's disappearance. He obtained an lawyer shortly after the search began.

THEORIES
Over the years many theories have come up and many have been written off.

One popular theory is that Lauren overdosed. Many witnesses have stated that Lauren had been doing illegal drugs that night. Pairing this with her heart condition it would be easy for her to have overdosed. An inmate gave a tip that his cell mate had gone to school with the men who were the last to see Lauren. The tipster claimed that they got scared when she overdosed and decided to dump her body in the Ohio River.

Another theory is that Lauren had been purchasing her illegal drugs from a motorcycle one percent gang called the Sons of Silence. It was believed that she could have been killed for a debt that she owed. I find this theory to be unlikely.

The random abduction theory is not seen as likely, but is still probable. Hannah Wilson's, a girl around Lauren's age who was found dead around the same time as Lauren's disappearance, mother believes there is a possibility that her daughter's killer, Daniel Messel, could be responsible for Lauren's disappearance. This theory has been largely written off due to the critical errors that were made by Daniel Messel in Hannah's murder.

LIFE WITHOUT LAUREN
In 2013, Rob and Charlene Spierer filed a lawsuit against the three men who were the last to see Lauren alive. Their attorney for the case stated that they didn't want to file the case, but were nearing a litigation deadline. The claim was that the men in question were aware that Lauren was intoxicated to a point in which she was unable to care for herself and they didn't practice due diligence in making sure she returned home. The case was moved to federal court since the defendants no longer resided in Indiana. Later, the case was thrown out by the judge.

Her parents don't believe that Lauren was the victim of a random abduction. Instead, they feel as if the last people who saw Lauren are refusing to give the police critical information that would lead to knowing what really happened to Lauren.

The same year that Rob and Charlene filed their lawsuit was the year that Lauren would have graduated from I.U.. Her parents did not attend commencement. Lauren was not left out of the ceremony. During speeches, speakers tried to renew the search for Lauren by reminding those in attendance of the search.

Rob and Charlene no longer believe that Lauren is alive. They have come to terms with the fact that they are searching for remains. Their only hope is that they will be able to give her a proper burial.
Every year on the anniversary of her disappearance Lauren's story gets another push in national news. It has been almost six and a half years since Lauren's disappearance.

Anyone with information is asked to call the Bloomington Police Department:

Posted by Study of Indiana Cold Cases at 12:14 PM